Advances in Care for Veterans with Traumatic Brain Injuries or PTSD

Spencer Milo scrambled to his feet in the smoke and dust, his training and adrenaline taking over. He had seen the suicide bomber, a teenage boy, maybe 15, coming toward his platoon in the split second before the blast slammed him to the ground. Now he was on the radio, calling for help for his injured teammates, shaking off the stars flicking through his own vision.

He had shrapnel in his face, an injured back. It wasn’t until much later, after the adrenaline had worn off, that he started to notice other symptoms. He felt sick to his stomach. He found himself searching for words. “Here we go again,” he thought. He knew what he was up against.

He describes it now as a combat concussion. His doctors would call it a traumatic brain injury, a TBI. It was a signature wound of the wars in Iraq and Afghanistan—yet there was never a consistent definition of what good TBI care should look like. The first time Milo experienced one in combat, years earlier in Iraq, his doctors misdiagnosed it as an incurable brain tumor.

Researchers at RAND, working with veterans and doctors, recently proposed a new standard of care, one that goes far beyond asking the right questions and ordering the right tests. It aims to redefine high-quality care for veterans with a TBI or posttraumatic stress disorder (PTSD). But it also could serve as a template for making health care more effective, more consistent, and more responsive for more patients.

That kind of care can be lifesaving, as Milo knows. “Having a plan, having that kind of hope—honestly, that’s one of the biggest reasons I’m still here,” he said.

Millions of American service members came home with brain injuries, PTSD, and other invisible wounds of war. The care they received ranged from excellent to nonexistent.

Millions of American service members came home from Iraq or Afghanistan with brain injuries, PTSD, and other invisible wounds of war. The care they received ranged from excellent to nonexistent. One study of veterans with probable mental health conditions found that fewer than a third received care that could be considered adequate.

In recent years, some of the nation’s top veteran health programs and support networks have joined forces to change that number. The Veteran Wellness Alliance, organized under the George W. Bush Institute, asked RAND to define what high-quality care should mean for veterans with a brain injury or PTSD. It wanted to set the bar high—for its partners, but also for other providers helping patients with those invisible wounds. It wanted to give veterans like Spencer Milo the best chance at recovery.

Months after the suicide attack in southern Afghanistan, he was getting two or three hours of sleep on a good night. He had an explosive temper, crushing migraines, tremors in his hands. He couldn’t remember asking his wife to marry him. He had seen one doctor after another, and the diagnosis was always the same. TBI. PTSD. Prognosis uncertain. He had a referral to a specialty program at Walter Reed National Military Medical Center, and he had quietly resolved that it would be his last.

“I was tired of being in pain,” he said. “I had made a conscious decision that either this program was going to work or, if it didn’t, I was done. I was going to take myself out of the equation.”

What would make the difference? That question fell to Carrie Farmer, who codirects the recently established RAND Epstein Family Veterans Policy Research Institute. Farmer teamed up with fellow researcher Lu Dong, a clinical psychologist by training, to investigate what makes some programs for veterans with TBI or PTSD more effective than others.

They pulled together lessons learned from two decades of combat in Iraq and Afghanistan. They reviewed existing clinical guidelines and interviewed health care providers and other members of the Veteran Wellness Alliance. They found that the highest-quality care programs shared four key characteristics:

“These clinical providers that partner with the Veteran Wellness Alliance were seen as really the best in class, the highest quality—but without any way to measure that,” said Farmer, a senior policy researcher at RAND who has spent a good part of her career working to improve the quality of American health care, especially for veterans. “How can you replicate it, how can you identify other places that might also be providing high-quality care, if you can’t fully define what these places are doing?”

Milo knew something was different the moment he walked into Walter Reed’s National Intrepid Center of Excellence (NICoE) for brain health. His case manager sat him down and walked him through every test and appointment he would have that day. Later, she scheduled a meeting with all of his doctors, so he would only have to tell his story once.

“They all knew my name,” he said. “They weren’t just looking at my chest to see my name tag and then, ‘Oh, hi, Milo.’ It was the first time I didn’t feel like a number. I felt like I was in charge of my destiny, like I got to choose how good my care was going to be.”

Care should be accessible, evidence-based, data-driven, and patient-centered.

RAND’s research team is now working to expand its definition of high-quality care to include depression and substance-use disorders. It’s also looking at what measures the Veteran Wellness Alliance can use, such as patient surveys or medical records, to ensure its current partners, and any future partners, meet the standard.

For now, that standard is focused on getting veterans the care they need. But there’s no reason it couldn’t be repurposed and reworked to ensure high-quality care for other patient populations with other health needs. The same principles apply: Care should be accessible, evidence-based, data-driven, and patient-centered.

“For the end user—the consumer, the veteran, the military family—health care can be a very, very confusing marketplace of choices,” said Matthew Amidon, the director of the Military Service Initiative at the George W. Bush Presidential Center. “This is really the first consistent and clear definition of the level of care they should expect.” 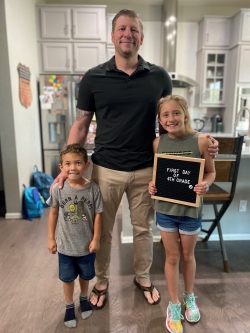 Spencer Milo with his two children

Spencer Milo still gets migraines, but he can see them coming, and he knows how to treat them. He oversees veteran programs and strategic development at the Marcus Institute for Brain Health at the University of Colorado, a program modeled after the NICoE for veterans, and part of the Veteran Wellness Alliance. He credits his four weeks in the Walter Reed program—the physical therapy, speech therapy, even K-9 therapy with a service dog named Nemo—with pulling him back from the edge.

He describes himself these days as a soccer dad. He re-proposed to his wife, this time with an audience, in New York City, as he accepted the Moral Courage Award from a veteran mental-health organization called Headstrong. He recently graduated from an executive MBA program; his final grade-point average was a perfect 4.0.

“You have to be your own best advocate,” he tells other injured veterans he meets through support organizations and volunteer events. “If you want the best, top-tier-quality care, you’re going to have to look for it. A traumatic brain injury sounds scary, and it can be—but that doesn’t mean you can’t recover from it.”

Source
Advances in Care for Veterans with Traumatic Brain Injuries or PTSD is written by RAND Corporation for www.rand.org

Malaria Vaccine May Not Eliminate Need to Combat Counterfeit Medicines

Malaria Vaccine May Not Eliminate Need to Combat Counterfeit Medicines